Laser Teeth Whitening: How Does It Work? 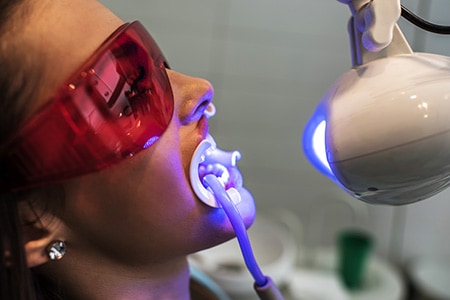 Until recently, the most common way to whiten teeth was to soak them in a solution of hydrogen peroxide or a similar substance. The procedure could be completed at home (using a weak peroxide solution) or in the dentist’s office (using a strong solution) – although often not covered by dental plans. Either way, whitening was completed over the course of several days or weeks.

As tooth whitening became more popular, some cosmetic dentists began to use lasers or similar lights to speed up the chemical reaction of the whitening solution. This whitened the teeth faster and required fewer whitening sessions. Unlike peroxide whitening, the new laser whitening cannot be done at home; it must be completed under the supervision of a qualified dentist.

All forms of tooth whitening work by releasing oxygen ions from a tooth whitening gel, which gently lift stains from the teeth. The laser simply lifts the stains faster. Another advantage of the laser is that (depending on the type of laser used) it can more easily be used to bleach one tooth at a time. This is helpful when one tooth is more discolored than the surrounding teeth.

Basic Steps to Laser Teeth Whitening:
If you decide to get laser teeth whitening, your dentist will follow an established procedure with a few basic steps:

Screening.
It is recommended that pregnant women and adolescents delay laser teeth whitening if possible. If tooth discoloration is a significant concern, teenagers can have their teeth whitened with close supervision by a dentist.

During the initial screening, the dentist will also check to see if your gums have receded to expose a significant amount of the tooth root. If this is the case, your teeth may bleach somewhat unevenly, because the roots of teeth are resistant to bleaching. The dentist may be able to offer alternatives to bleaching.

Pre-Treatment.
The next step is for the dentist or hygienist to clean your teeth. He or she will also ensure that all cavities are treated and filled, because otherwise the whitening solution could penetrate through the cavity into the interior of your tooth.

Medication.
Any form of tooth whitening can cause temporary sensitivity, especially in persons who already have some sensitivity in their teeth. For this reason, your dentist may prescribe a non-steroidal anti-inflammatory medication prior to the first whitening session.

The Whitening.
When it’s time to begin whitening, you’ll lean back in the dentist chair as usual, and the dentist will use a rubber or plastic guard to hold your mouth open.

Next, the dentist will apply a barrier over your gums to protect them from the whitening solution. This barrier is often applied as a gel which hardens to a protective rubber-like layer. When the gums are fully protected, the dentist will use a syringe to apply a whitening compound to the front of your teeth. The dentist will use a pen-style laser to activate the compound, which will cause it to foam somewhat as it lifts the stains away.

When all of the teeth have been whitened by the laser, the dentist will allow the compound to remain for a few minutes, and then wipe off the whitening compound using a small vacuum tool. He or she will then apply a new layer of compound and repeat the process as many as three times.

You’ll know that you’re reaching the end of the session when the dentist carefully rinses your mouth out, then gently removes the protective layer from your gums.

Follow-up:
The teeth whitening process is not permanent. Teeth can be re-stained, especially by cigarettes, beverages such as coffee or tea, or some foods. You may need to schedule a follow-up whitening session; the effectiveness of the whitening lasts for as few as six months or as long as several years.

If you’re ready for laser teeth whitening, call a professional dentist today. He or she can describe these steps in more detail and answer any remaining questions you may have.

Check Out These Teeth Whitening Deals from Our Partners:

$5 off order $50 or more at AuraGlow.com w/ code AURA5 **not valid on subscription items