What are Dental Implants? 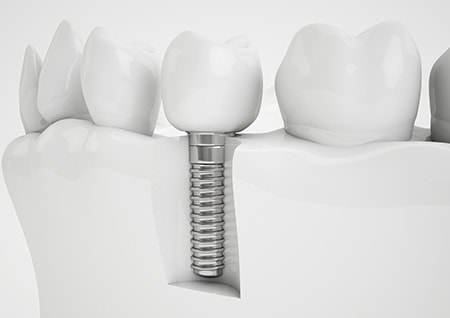 The year 600 AD was busy with new inventions: Indian intellectuals were playing early variants of chess, Chinese farmers were cultivating tea as a crop instead of harvesting it in the wild, and Mayan dentists in South America were creating the first known dental implants. The dental implants consisted of three false teeth made of seashell, which were inserted in the mouth so that they attached to the jaw line.

Modern dental implants are made of stronger, more reliable materials than seashell, but the premise is the same. A facsimile of a tooth is inserted in the mouth so that over time, the implanted “tooth” bonds with the bone of the jaw. Like a real tooth, an implanted false tooth will have a false “root,” which holds the tooth in its socket.

Tooth implants are also available for multiple teeth. In fact, some patients have implants to replace all of their teeth. In this case, some of the false teeth may be connected so that fewer false “roots” are needed below the gum line.

Dental implants are different than dentures or bridges, because implants become integrated in the mouth and are not removed on a daily basis. There are several advantages of implants over dentures:
•    Getting fitted for a denture bridge requires the modification of the teeth around the bridge. The form of the teeth has to be changed so that they support the false bridge. This weakens the existing teeth.
•    Once established, dental implants are more firmly situated in the mouth than dentures or bridges. They can be used like teeth, with none of the clicking or shifting that characterizes dentures.
•    Because implants act like real teeth, they don’t typically cause the same damage to gums and bones that dentures can cause.

Dentures and bridges do have one advantage over implants: they typically cost less. Just one tooth implant can cost two or three thousand dollars, and most dental insurance plans do not cover the cost.

Basic Procedures:
Implants are added to the mouth in two stages. In the first stage, a dental implant root is placed in the mouth. The root is usually made of titanium, and it is often shaped like a screw or a blade. After surgery, the root will be allowed to integrate with the jaw bone. This stage is called “osseointegration,” and it will not be finished until several months after the implantation surgery.

Once the osseointegration is complete, the dentist will insert an abutment, which will connect the implant root to the false tooth. When the abutment is in place, the dentist will add a temporary crown, which is a prosthetic that allows the gums to integrate with the implant. The final stage is the replacement of the temporary crown with the permanent crown, which is a false tooth that is usually indistinguishable from the surrounding real teeth.

During the entire process, it is important for the patient to adhere to all of the dentist’s instructions regarding oral hygiene. Regular brushing and flossing are key to the success of the osseointegration, and bad oral habits can cause the implantation to fail.

An Experienced Dentist is Important:

Implanting prosthetic teeth is a tricky procedure requiring a blend of art and skill. Particularly for patients who will have several teeth implanted, it is important to find a dentist with experience in these procedures. Such dentists are referred to as prosthodontists.

Although in some American states any dentist can call himself a prosthodontist, the dental industry generally only recognizes dentists who have attended three years of additional schooling in this specialized trade. A list of certified prosthodontists is available from the American College of Prosthodontists in Chicago, Illinois.

If you are considering a tooth implant, you don’t have to seek out a prosthodontist immediately. You can begin your research by discussing your options with your usual dentist or oral surgeon, who can tell you whether a tooth implant is likely to work with your jaw. The process for implanting dental prosthetics can take a long time, but in the end, it can result in a healthy, natural smile.