All About Teeth Brushing 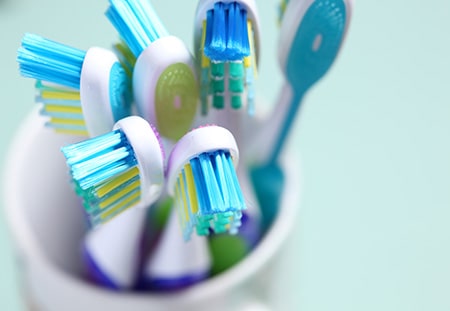 Studies have shown oral care to be an import component to our overall health, influencing issues such as heart disease and human lifespan. However, even with the available information, and the constant flow of new products being introduced to help make oral care more effective and convenient, the monotonous task of brushing is often neglected by children and busy adults alike. Brushing regularly remains the single most effective way to remove harmful plaque from the teeth and gums. With regular checkups and habitual brushing, healthy teeth and oral well-being are certainty achievable.

History:
The origins of brushing  come from “chewingsticks,” which were used by the Babylonians as early as 3500 BC. Eventually these stick began to morph into what we know today as a toothbrush. Yet, it wasn’t until 1780 that the first true toothbrush was produced; and toothpastes or powders did not come into general use until the 19th century. By 1885 production of prophylactic brushes were being mass marketed in the United States. Surprisingly most Americans didn’t brush their teeth routinely until soldiers brought the Army’s enforced habit back home from World War II. Today, with advancement in technology, medicine, and the construction of the American Dental Association, brushing has seen much advancement including the addition of fluoride to toothpaste, silk thread floss, intricately designed toothbrushes as well as the invention of electric brushes.

Brushing Tips:
Brushing regularly helps removes plaque from the outer, inner and biting surfaces of the teeth. The first step in brushing is to place a pea-sized amount of toothpaste on the brush. Next, run the bristles of the brush along the gum line at a 45-degree angle with the bristles contacting both the tooth surface and gum line. Then, brush the outer tooth surfaces of two to three teeth at a time, using a vibrating back and forth rolling motion. Generally, dentists recommend a circular technique for brushing. This includes brushing only a small group of teeth at a time, gradually covering the entire mouth. Remember to maintain a 45-degree angle with bristles contacting the tooth surface as well as the gum line, and to brush gently using back, forth and rolling motion. Finally, brush the tongue from back to front to remove odor-producing bacteria. The recommended time for brushing is two to four minutes, and within 20 minutes of eating.

Products for your Teeth:
For general use, choose a brush with soft bristles and rounded ends that will not scratch and irritate teeth or damage gums. Keep in mind every mouth is different and the type of brush you need depends on your mouth and the position of your teeth. Ask your dentist what type brush would work best for you. Toothpaste offers Fluoride in various forms and is the most popular active ingredient in preventing cavities and tooth decay. In addition, most toothpaste includes an abrasive, which studies have shown to reduce the amount of time need to remove plaque by up to 50 percent. Look for the ADA (American Dental Association) logo on toothpaste brushes and other oral care products: the logo is widely recognized as a symbol of safety and effectiveness. The use of electric toothbrushes has never been proven to remove plaque better than conventional brushes; however, if using an electric brush helps with thoroughness, it is a considerable option. It is suggested that toothbrushes be replaced every three or four months, or when bristles become bent or frayed. Children may need smaller brushes than those designed for adults and may require supervision during brushing until the age of seven or eight.