Should You Use an Electric or a Traditional Toothbrush? 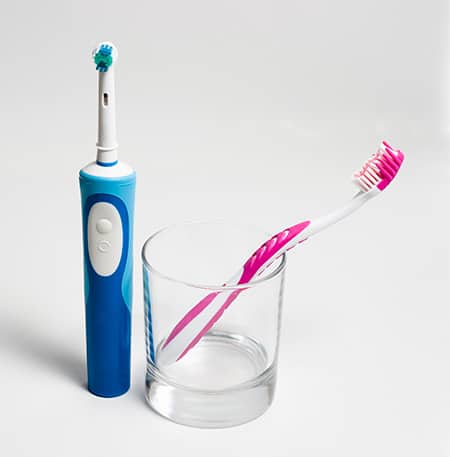 When electrically powered toothbrushes were introduced in the 1960s they turned out to be ineffective, and prone to mechanical failure. During the years that followed, they tended to be used only by people with either dexterity problems or cognitive impairment, while the rest of the population stuck to traditional toothbrushes. The 1990s saw the introduction of a new range of oscillating-rotating and counter-rotational electrical toothbrush designs. When mated to more powerful motors, these competed with manual brushing and flossing for the first time, including essential inter-proximal cleaning between adjacent teeth, and improved gingival health due to better gum massaging.
Although for these reasons the modern choice may be almost automatically in favor of an electrical toothbrush, the following factors could still influence the final decision:

•    Affordability: This is always a factor when introducing new technology – it is pointless recommending an electric toothbrush to a someone who can’t afford one.

•    Fear of Technology: Some people, particularly older people, have a genuine fear of technology and new things – it is pointless trying to recommend something that may never be used.

•    Dexterity: The ability to grip and guide the toothbrush handle is of the utmost importance. A young child with tiny fingers, or an older person with arthritic joints, both find it easier to rotate an electric toothbrush than guide a manual one consistently through an intricate pattern.

•    Cognitive Ability: The capacity to understand, may also dictate the use of electric technology. Generations of dentists have failed to get generations of normal patients to follow consistent patterns of manual brushing and flossing – for this reason getting an impaired person to move an electric brush randomly round their mouths is often the only workable solution.

For most people though, the modern electric toothbrush still wins hands-down for the following reasons:

•    Modern electric toothbrushes have counter-rotating heads that brush teeth in two directions, quickly and effectively dislodging food debris and plaque. While it is possible to achieve the same results with a traditional toothbrush, many people soon fall out of the habit, with an inevitably poorer longer-term outlook for their teeth.

•    The smaller brushing head and vibrating action mean that less force is necessary to achieve a result, in turn preventing injury if a poorly controlled device suddenly slips. It also facilitates proper cleaning in tight corners where plaque and debris congregate.

•    Finally, the counter-rotating action of electric toothbrushes counteracts the effects of our left or right-handedness that tend to favor movement in one or other direction only, thereby encouraging even, effective cleaning of all our teeth.

An electrical toothbrush is therefore the obvious hygiene choice for the average health conscious person. This choice should also be made in the light of other relevant factors. Whichever decision you make, it is still important to brush your teeth consistently, thoroughly and regularly.